Companions Are Indispensable And Friends Are The Best Companions

@shubhwaj 63
9 months ago
Proof of Brain 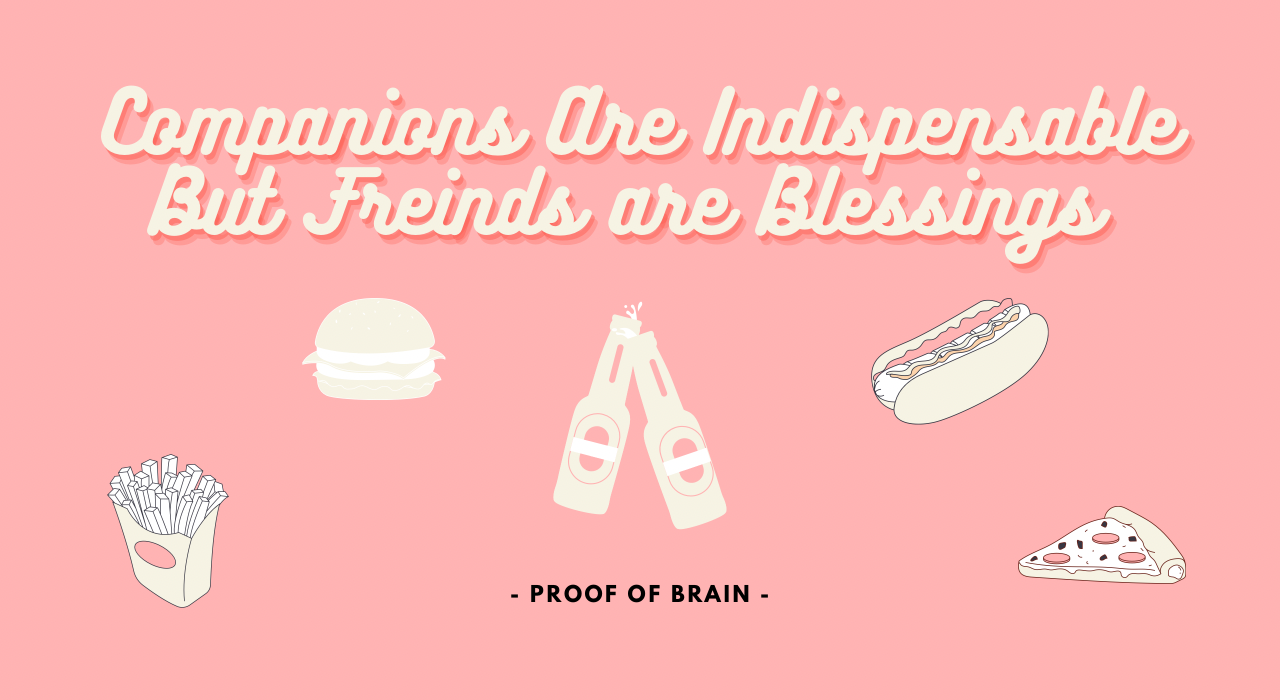 Companionship knows no bounds. It might start at the bank of a river. In a bus or a train 🚊. Amidst a mountain summit. Or even if you end up staying at a hospital.

Anywhere and everywhere. It blossoms on its own. Unexpected. Unwanted. And uncalled.

It is a feeling of closeness. It is a desire to hold hands. Its a relief and a blessing that you’re not experiencing the time alone. Its also the joy and the pleasure.

Sometimes it’s a hope in the struggle. A flash of light in the dark. At others it’s like the flavour in an icecream. It’s absence can make things taste 👅 bland. Dull, dry and drab.

There is a companion in everyone and everywhere. The lady that sit next to you on a flight. The guy that lives next door. The blonde that sits in the cabin adjacent to yours. The fat uncle you meet in the cafeteria. The stunning girl that hits the gym same time as yours. The wonder woman who waited in a queue along with you. Your dog that has hijacked your home. And the cat your bed. Then the bee 🐝 and the bird 🦅 and the butterfly 🦋. Everyone.

Your smartphone and laptop are the digital companions. And your car. Also it’s key 🔑 that you fidget with, when you have nothing to do. No less than a companion.

There isn’t a more generic relation humans are bound with each other. And their surroundings.

Companions are the essence, they sum it up all, the whole purpose and meaning and the cycle of life.

They are the cure to human loneliness and their need to socialise. Pursuing connection is our fundamental biological instinct.

For really long I had been confused about defining my relationships with people.

There are some folks whom I know since school. Still there with me. Infact they are the part of most of my wonderful memories.

They have stood with me through thick and thin. I call them friends.

But all sorts of companions are not friends.

There is a blurred line that distinguishes our depths of connections with people. That we usually don’t really care about.

But I want to emphasise the significance of classifying the companionships. Its required to build the constructive connections, that can develop into long lasting relationships, with people that actually care about you.

If we look at everyone with the same eyes, you’ll shoo away the companions who you can better vibe with. Who can have a positive influence and impact on your life for years to come.

The word ‘friend’ is overused, I believe. So much that it has lost its significance.

Maybe Facebook is to blame. That tagged everyone you knew or didn’t know as your friend.

Or may be it is conventional, that we don’t hesitate addressing most of our connections and even acquaintances as friends.

But we need to ask ourselves - are they really our friends? Or mere companions. Who happen to be spending a part of their life with us.

Most of our relationships are hard bound by the proximity. It plays a major role in who ends up being a character in the story of our life.

Kinships shatter, gradually. Sometimes all of a sudden. The strongest of relationships accompanied by forever promises. Wash away.

When I completed the high school, our then group of friends did somewhat similar promises. That whatever we had back then would never die.

I hardly talk to most of them anymore. A lot of them aren’t even a part of my social feeds. God knows where they disappeared. Time flies on wings.

Similarly in the graduate school, and during my first corporate job and then the second. I became “friends” with numerous people.

Most of them aren’t associated with me now. In any way.

You can always count the number of real friends you have on the fingers of a single hand.

I do have a lot of memories with them as well. Those class bunks. Those after office parties and bitching about the bosses. The utmost pleasure of gossiping with a co-worker about the office politics. And everything else. Life would have definitely been monotonous and boring without them. But most of those associations remained confined to my tenure in their vicinity. They never broke out. May be neither did I for them. So it was a two way street of give and take until it wasn’t.

But soon the touch dissipates. And new connections flood your life. New relationships.

If you’ll introspect in depth, you’ll find that the people in your life always keep on changing based on the place you live or spend your time at.

It’s the natural cravings of companionship that steer us towards each other.

But you’ll also find people who cross those boundaries. Who support you and make an effort to be a part of your joys and sorrows even after you stop being affiliated to a common institution or social setting.

They might not be always physically present. But they remain aware of your whereabouts. And they are ready to go a step further to spend time with you if their schedule permits. They don’t shy away in crossing the viable boundaries and borders to meet you. I upvoted you, thank you for posting! 👍

From my own perspective companions can be your friends,family members and relations who are so dearly to them.i encourage everyone not to losse the trust that companions have in them.

Nice piece. In my opinion, i think it is best to enjoy people's company without having to put too many labels or worry about the longevity of the relationship. the value is in the experience.

True I guess. May be it is impractical. As we can’t really ascertain the longevity beforehand. And we do instinctively call everyone our friend in the time being. And they automatically get filtered as we age and change.

Thanks for stopping by and sharing your opinion mate. Have some !PIZZA

@nonsowrites.pob! I sent you a slice of $PIZZA on behalf of @shubhwaj.

Congratulations @shubhwaj! You have completed the following achievement on the Hive blockchain and have been rewarded with new badge(s) :