@themarkymark 81
about 1 year ago
Hive Improvement Under the current system, if you remove a vote you forfeit all future curation rewards on that post even if you revote the post prior to payout. In other words, if you vote 10% on a post and later decide you want to reward it 20%, you no longer earn curation rewards.

I do not believe you should be penalized to change your vote either higher or lower, outside of course the loss in voting power for the additional votes.

This topic has been discussed a lot in the past, and the original developers agreed it should be changed and planned on changing it on a future hard fork.

Under this change, voting power will still be used on all votes. So to vote 10% and remove it for a 20% vote would require 30% voting power. I also propose this change as well, only charging the voting power delta for new votes.

Active exploitation in the wild

There is also an active exploitation being used to take advantage of a side effect of the current behavior. When a user unvotes a post, their curation rewards are forfeit but still exist in the curation pool granting all curators more curation rewards than their current stake entitles them to. I know of at least one user that exploits this unique behavior.

This proposal recommends the following changes in a future (hopefully next) hard fork.

@leonis the issue is real, I knew of this back on steemit but it slipped my mind.

Fully support your proposal, it is something that must be fixed

Sounds good to me.
This might sound a little naive, but couldn't somebody start spamming up- and un-votes because VP gets restored?

No vp is ever restored

Seems pretty reasonable to me. Sounds like it was very carefully thought out as well. I would support this.

@thisismylife 73
about 1 year ago

Oh, I didn't know this was a thing. Good to know that I need to be careful adjusting my votes in the future. I never knew. I agree one should not be penalized for that.

Makes sense especially since we saw a change in the reward curve in the last HF.

The incentive to engage in what you describe is lessened to a degree I believe.

I never realised that. I thought the warning was just to say that you'd lose your curation rewards for the vote you were removing, not the revote. Isn't it punishment enough that your VP from that vote is lost? I often accidentally under vote because I hit the slider as I was going to vote, so I readjust it.

I'd certainly support this proposal.

Isn't it punishment enough that your VP from that vote is lost?

No because it unfairly allows you to increase your vote if a post is popular, that is why it is important the vote time is adjusted to the latest vote. Under latest hard fork the vote time is less critical, but still important after the first 24 hours.

that is why it is important the vote time is adjusted to the latest vote.

Something I assumed would only be logical anyway and thought was what happened. 😅

Agree on all but the vp cost. It should cost the full amount instead of just the delta.

This makes sense under the new rules.

Thanks a lot, I was not aware about that bug.

I was really unaware of this situation, I appreciate you letting us know. Your proposal is very good, I hope they are taken into account in the hard fork

Agreed, should be added. It's been a long-standing issue.

I didn't know there was such a penalty and I support your proposal.

I did not realize that is how it worked. Wow... Anway, I agree. Since hardfork, that is not needed.

Good idea. Except that even if it's supported we need to wait another two years for the next hard fork.

I think most people are for this proposed change.

If there are any against, I would be curious about the reason.

Well @enforcer48, I will tell you a very good reason to ponder. But then, you'd have to read it probably at the bottom of the comments section of this post. };)

I think things are resolved now.

Nope not at all

Same here. Dude you told me on no agenda social this was a great place. Who you piss off man? Hey I’m outta the area I’ll be able to take a dive into his During week. Maybe it’s better to find out now it’s much to centralized here. I hope that’s not case and things work out. The 3 second block time is extremely interesting for projects. I hope things get worked out.

Mark downvoted me again hours after this.
Still don’t reply to me. This is gross 🤮 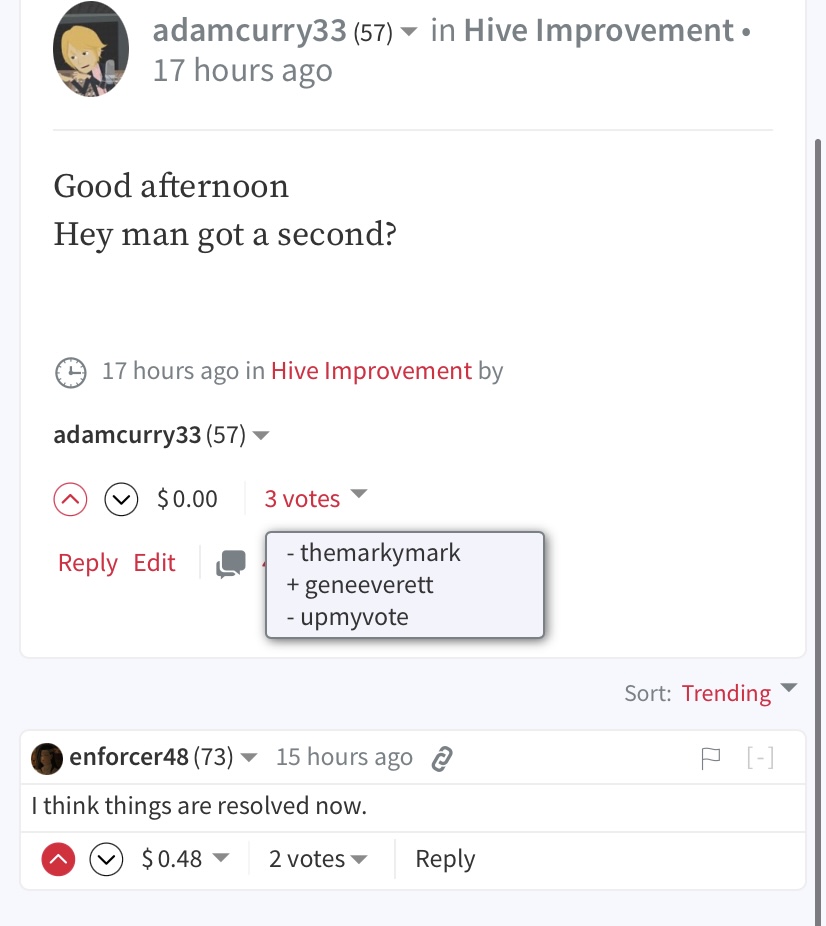 I think this makes sense given the new curation curve. It seems to have covered all bases and it seems fair.

@cryptoandcoffee 79
about 1 year ago

Didn't realise this and yes it would be a good idea to fix this.

With the new curation rewards in place this seems like an even better idea than before.

I also propose this change as well, only charging the voting power delta for new votes.

I support this, although I wonder how much of a technical challenge it would add to figure out the difference rather than just replacing the vote and charging VP as normal.

Not much was mentioned about changing votes to less weight, but obviously if that were to happen no VP should be refunded.

Not much was mentioned about changing votes to less weight, but obviously if that were to happen no VP should be refunded.

I specifically did mention this in the 10%->5% example but no case VP will be refunded.

Yes. This sounds like a good idea I think. I’m glad that there are people like you taking the time to carefully consider the angles from a code level @themarkymark. Everything we can do from a programming level at the blockchain level only gives higher levels of integrity to the blockchain. Thanks for explaining it so well.

@luvshares 57
about 1 year ago
LUV

@pizzabot 56
about 1 year ago
Connect

@themarkymark! I sent you a slice of $PIZZA on behalf of @badpupper.

While I do agree to the proposal of charging the additional %age upon revote, I am not sure on the non-refund of the additional amount if revote value is less than the original one.

Could you please throw some light there?

I am not sure on the non-refund of the additional amount if revote value is less than the original one.

Voting power should never be refunded. Once a vote is cast, the voting power is used. End of story.

What I would like to see changed though, is if you vote 10% and want to change it to 20%, it doesn't cost 30%. As long as the vote time is adjusted to the latest vote, there is no way to exploit it for personal gain. I would like to see a future votes only cost the difference in %, provided the vote is going up in %. Going down, nothing changes as there is no scenario where voting power should be refunded.

That's fine about no refund. I wonder anyone would do that.

I didnt know this, is there a Hive sheet that explains how to use it? I unvote and increase votes if I see a good post not get enough votes. I didnt realise I was being penalised.

I support your proposal

Yes I am all about this change. Would be another nice step forward after what the last HF changed.

In fact, I couldn't care less about this proposal. Since from my point of view, the only thing that I can clearly perceive is that this proposal is promoting and incentivising more blind, automated, inorganic and unconscious votes from those who wrongly dare to call themselves curators.

In my opinion, everyone at any moment should know and be very aware of what the hell they vote, how they vote for it, when they vote for it and with how much freaking VP % they vote for it. There is no excuse whatsoever if we actually are talking here about being a freaking living being participating and sharing in a freaking social network.

And obviously, everyone should vote only after having read, consumed and thoroughly digested what they vote. };)

There is so much to develope, why waste energy on creating a backdoor which can be taken advantage?
There are many edge cases to what you proposed.

@themarkymark 81
about 1 year ago (Edited)

This cannot be taken advantage of.

There are many edge cases to what you proposed.

I am not saying its not a good idea, but as we saw with curation until today, any complexity is usually taken advantage by bots and keeping it simple (as much as can be in this phase with all the must complexity) seems like the way to go.

@themarkymark 81
about 1 year ago (Edited)

It cannot be taken advantage of.

If you vote 1% at 10 minutes, you are near the front of the line. 2 days later you decide you want to give it 25% instead, you are charged 15% voting power to raise your vote to 25% and you are now at the end of the line.

In fact, it would close a loophole being actively manipulated right now.

You mean charged 24% right? The delta

Instead of editing adding here, maybe I am mistaken. If its just changing the timestamp and weight on the same vote it is atomic.
I could be wrong and this is much simpler to implement than it looks.

Every day's a school day here! I'm all for it

Oh what the fuck. I thought I was noticing something like this with my auto-bot setup.

A soft fork to fix this should be worked on immediately.

Thanks for publicizing this captain!

Hi mark @themarkymark
I don’t know you but you downvoted basically all my posts to zero. I assume it’s a mistake but either way could you please drop me a line. Thanks

I think it sounds reasonable for lowering the vote.

I have never lowered a vote, but, I have increased it, sometimes if they are new and there isn't much on their post. It's just a little booster or if I mistakenly don't make the slider go up enough and missed it, but, I lose my curation for this?

If you change your vote, you loose all potential curation rewards.

That's fair. It prevents trying to cheat the system. I'll get out of that habit and hit them another time.

I disagree, autovoters need to be penalized, I would actually call for a heavier penalty.

It has nothing to do with auto voting.

Read this and understood what you meant. I agree.

Voting power should never be refunded. Once a vote is cast, the voting power is used. End of story.
What I would like to see changed though, is if you vote 10% and want to change it to 20%, it doesn't cost 30%. As long as the vote time is adjusted to the latest vote, there is no way to exploit it for personal gain. I would like to see a future votes only cost the difference in %, provided the vote is going up in %. Going down, nothing changes as there is no scenario where voting power should be refunded.