I think a LOT more people love Freedom than we are told!

drutter in Informationwar • 2 months ago

The mainstream media tells us that most people are happy with Covid lockdowns, mask mandates, and vaccines. Here in smalltown BC Canada, my experience is that at least HALF the population is awake, aware of the lies and deceptions, not taking the vaccine, and ready to stand up for freedom! 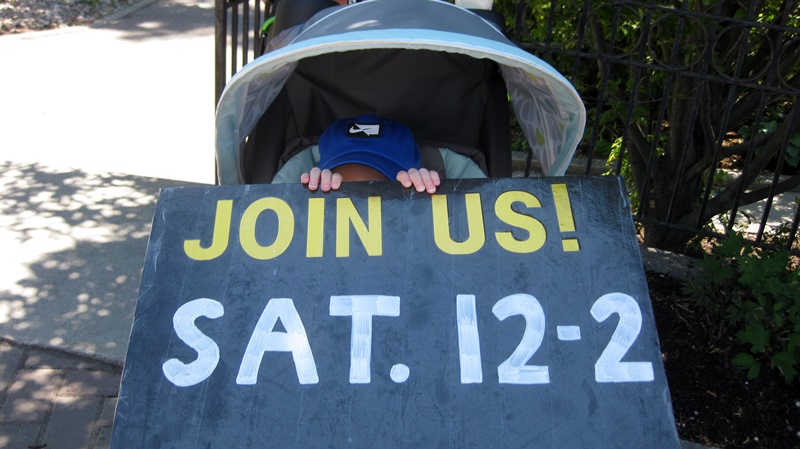 Weekly rallies are taking place across the country! Here's my son, the youngest regular participant around here, inviting the rest of town to join us in peaceful civil disobedience of unjust, unnecessary, and harmful restrictions.

We get about 50 people each time we meet. I was at a large rally of 4000+ people in Kelowna recently, and there's another one on Monday! It's great to finally be around other humans again, after the nightmare of 2020. Some bring signs, some bring flags, some bring sliced watermelon. Participation is grassroots and voluntary. There is no one leader, no way to destroy it by making a few arrests. And thus far, we have been allowed to continue. In fact, we've been mostly ignored, especially by the media. So growth is slow but steady.

One issue we've had is that it's hard to get the word out using the internet. I was banned from YouTube for 14 days after posting footage of the rally 2 weeks ago. We've had a total media blackout of this movement - hundreds of thousands of Canadians protest every week, and there has been ZERO coverage in the mainstream! 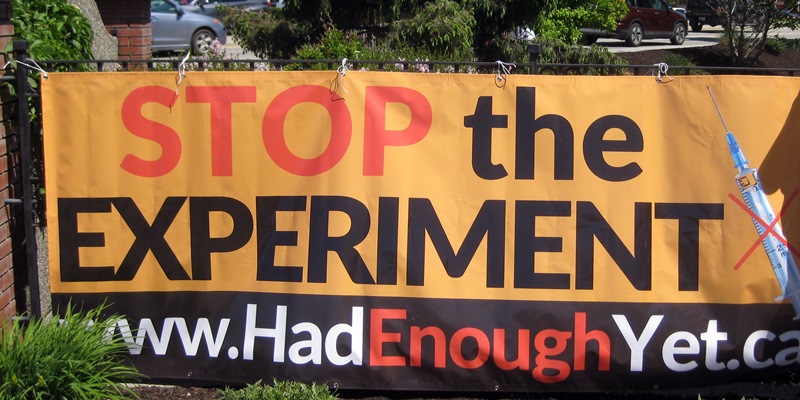 The signage people make and bring just keeps getting better each week. We have some exellent banners from VaccineChoiceCanada that can be seen for blocks. There's a few regulars, getting their flags and signs ready for an afternoon of reaching the public with information they may not be getting elsewhere. 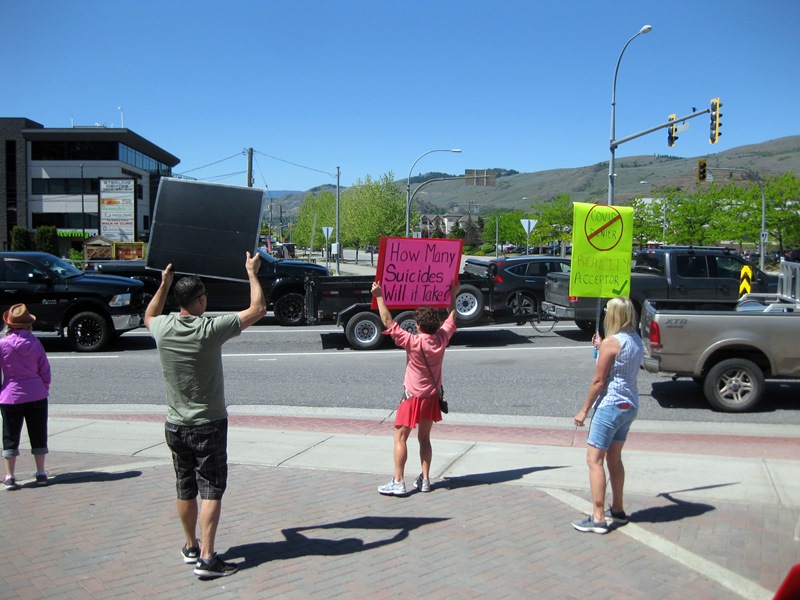 Everybody who participates has a reason for it. Some have been touched by tragedy because of the lockdown, others have lost jobs, or lost connections with family members, or lost hope. The energy is always positive at these events, though! People get a lot out of knowing (and seeing) they aren't alone, and from simple proximity to others. 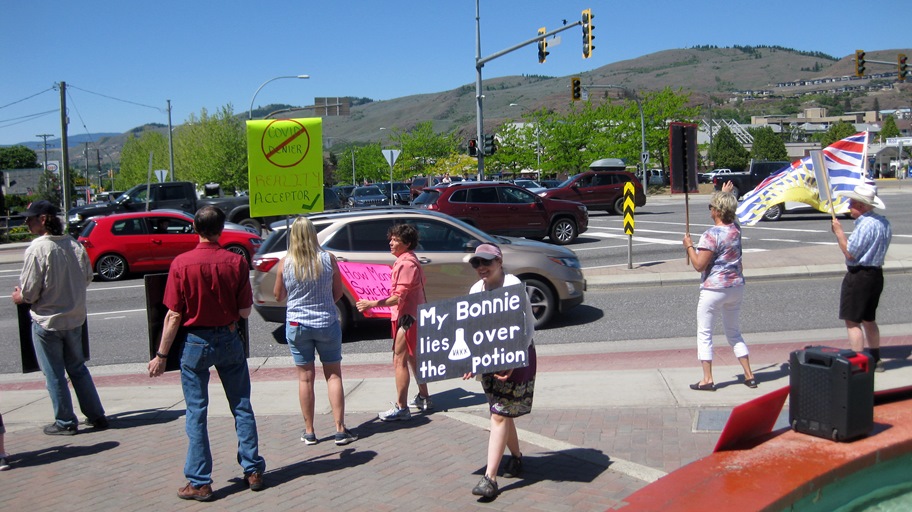 But it's not just my fellow protestors that aren't happy with the lockdown, "vaccines", etc...

The public is on our side

Support from people passing by is overwhelmingly positive! Of the reactions we get, about 80% are friendly and supportive. We get a few angry faces, a few middle fingers, and a few people who point at their mask as if to say "you should be wearing one too". Mostly, we get happy honks, cheers, fist pumps, hang tens, thumbs ups, and "love you" hand signs.

This is a smaller town - I moved out of Vancouver a couple years ago. Smaller towns are typically more conservative, which is often associated with resistance to bullshit coming from government. I'm not trying to make this a partisan issue, just saying, maybe it's not surprising we get so much support here. Then again, I hear the rallies in Vancouver are pretty awesome, too! People are upset their freedom has been taken. A lot that I talk to are aware this is a scam, not just business as usual, and that society has probably changed forever. Many are just as informed as I am about these issues, even the older people. They know what's up. These are educated, intelligent, informed people who aren't happy with tyranny in their country.

CBC tells us that we need to hit 75% vaccinated to end the lockdowns. I'm telling you right now, there's NO WAY that's going to happen. We're going to stall out around 50%. Numbers are already dropping, and almost everybody who wants it has got it. But I've said from the start, that's the plan. They intend to wage the war against unaccinated people forever, not win it. Prohibition is a racket. In this case, the prohibition of socialization, free markets, worship, travel, etc. It can't work, and that's the plan. Enforcement.

But increasingly, people are aware to this reality! 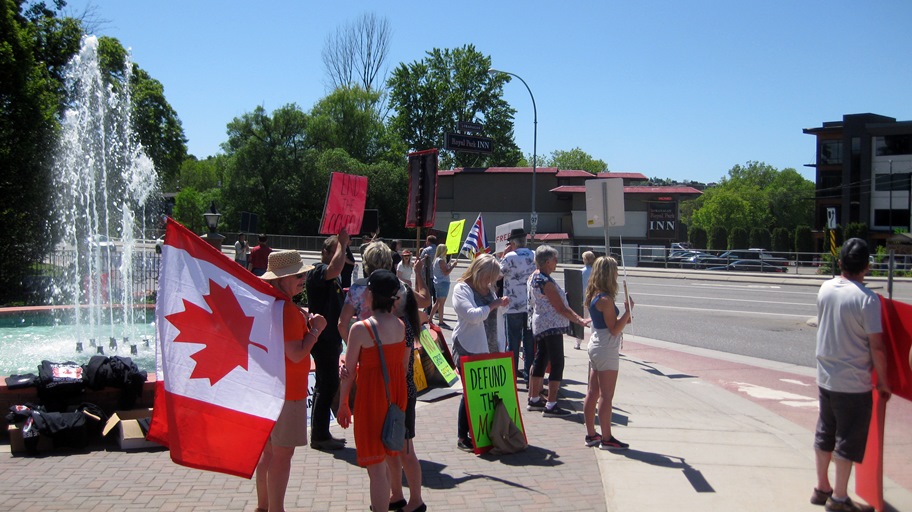 Don't let the small size of the group fool you! The public may not be joining us on the sidewalk, but they're almost entirely on our side.

If you feel alone in your resistance to tyranny, if you feel like nobody else around you cares about freedom, just remember this.... you're probably surrounded by people who think the same way! We're being lied to that we're loners, that the majority is happy licking boots, that the elites have this thing in the bag.

They'll win if you give up. The reason they're trying so hard to get you to give up, is because that's really their only hope of defeating us! Deny them that, realize your power, and hold steadfast. I am with you, and we are the MAJORITY!

Judging by some of the signs there, people are aware the media isn't telling the truth. Hopefully the public realizes their power and stands up to this tyranny. They know it's wrong... they just need to do something about it.

Fantastic having people awake to the scamdemic.

Absolutely wonderful! Beautiful day, excellent signage, and a great bunch of people! Thanks for the juicy photography :)