Turning all tokens to POB !

clixy in Proof of Brain • 3 months ago 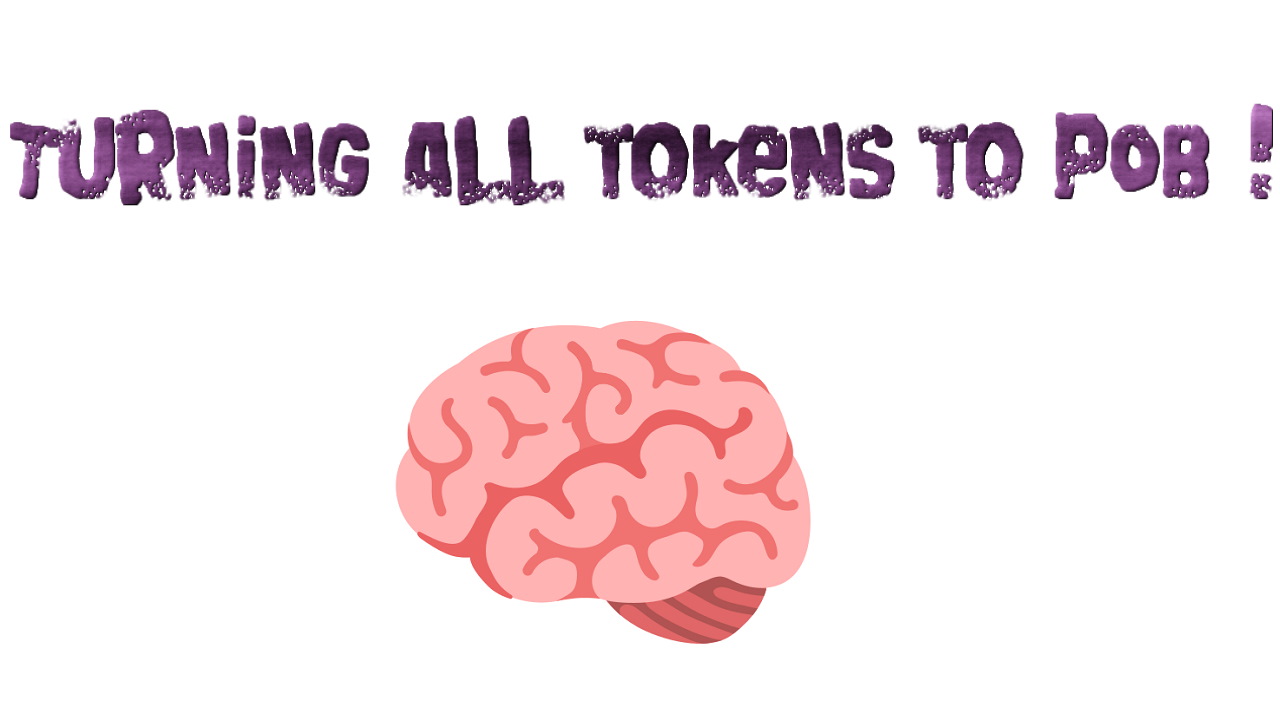 My main account is @clixmoney and I don't want to create from this account so often because it's mostly created for proof of brain tribe and exactly to curate content with the power I have. I don't sell POB at all, so I use everything to power up the account. The same about hive earned here.

But sometimes I see myself earning other tokens. Even if I don't use their tags or platforms. It seems that's possible to earn those even if you curated them without having any power. Maybe that's done to promote the tokens. For example, I see in my wallet in hive-engine : cent, ctp, neoxian, bht, archon and foodie. But I never bought them or owned them on this account.

So, since those tokens are given to me just because I'm curating them sometimes even without having any power and not even willing to grow this account there, I'll just sell them and buy more POB. My goal is to grow faster in proof of brain token because I see my growth not that fast. 1650 pob in more than 4 months is not a lot. Also, I noticed that I earned in 10 day, only 27 POB from curation. Some maybe earn that only from one single upvote. So, I'm too far from that, even using most of my earnings to power up my both accounts.

As well, I'll use on this account leofinance tag because it's strategy of investing what I earn from my content. Maybe this will be useful to someone, and those who want to grow in a particular tribe will do the same.

I don't know if this is right or not in terms of ethics. But I don't think I'm harming someone by trying to grow in one tribe mostly while I grow in all of them from my main account !

Powering up gives us some influence that may help us build the community and improve it.

Everyone has his strategy to invest. POB still offer the biggest ROI.

It might be somewhat harmful if you dump a lot of tokens or sell cheaply. But I don't see any problem with exchanging a little at a time especially with a respectable sell order. After all, they were designed to be traded and used to gain wealth :) We can't hodl every last thing we get and never try anything new.

We can't hodl every last thing we get and never try anything new.

That's for sure ! After all, we can't power up forever as well. I think everyone has a level want to reach. As well, there is another risk, imagine someone powering up all his/her earning for a long time and when he/she reaches the level they wanted, the price fall to the bottom. So, time will be wasted and the value will be so low depending on the time spent. That's a risk we are all taking. We never know what will happen in this crypto world. But I'm willing to take that risk. As many of us do !

Maybe we can power up forever. We can take a little every so often, invest it in something new, then pay back our Hive account from the first profits. Think of the Hive account as something to use and then repay?

Eventually the Hive account will be huge that way.

Yeah, we may power up forever. But, we have to have a set goal anyway. That will help us to achieve it. What will happen after is unknown. We just have to hope for the best.

All tokens to POB? This is a good route, I'm doing this maybe since APRIL. Thanks a lot. It's a big pleasure !

Wow this is fantastic. I think it is necessary to strives towards developing which i think the group gives room for this.

Powering up your POB is a fantastic idea which i believe once this can be done, there is high tendency of making it big from curation.

Generally i see this as a means of given oneself value as well as the community as a whole.

That's for sure. The only thing we can be sure about, is the community that may stay forever around. Other things are just tools to empower the community !

Ah, I understand now. Thanks for letting me know about that. I should comment more for that reason. ☺

Congratulations @clixy! You have completed the following achievement on the Hive blockchain and have been rewarded with new badge(s) :

POB is the best no doubt. You won't regret it. For me Social blockchain is all about POB only. Good vibes friend, keep it up 😊👍.

Thanks. I hope we will be able to reach the total proof of brain concept, or close to it. We need to work on that all together to make it valuable for everyone building here.