shepz1 in Proof of Brain • 3 months ago 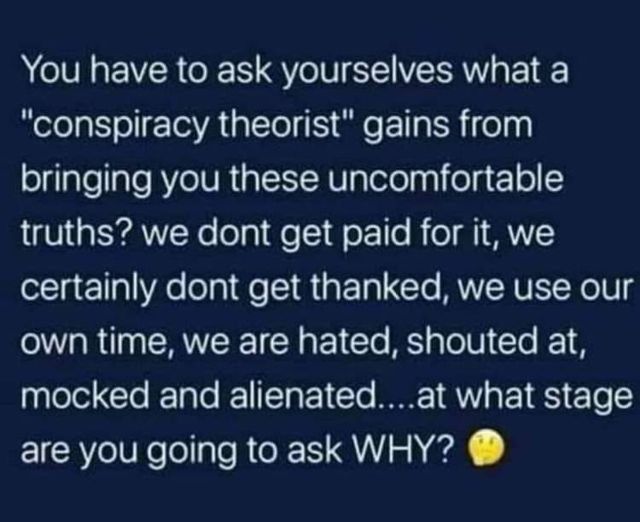 And we were called con-spiracy theorists for stating as such.

I have a thick skin so care not now. But I will say "I told you so!"

Apparently they admitted the PCR test was not fit for purpose last Christmas, but still used it until this week.
I have read that they still may con-tinue using it for the rest of the year.
Just like anything over the last 18 months, it does not make any sense!

They (governments) have used this faulty test to take away our freedoms. To make some self imprison. Not me. I do not do prison talk lock-downs. I have way toooooooo much to do in life with a farm to be told by any nanny state what to do. "Landmark legal ruling finds that Covid tests are not fit for purpose. So what do the MSM do? They ignore it "
https://www.rt.com/op-ed/507937-covid-pcr-test-fail/

Want a quote from the inventor of the PCR device? Oh go on then.

I can do better than that though, I can give you the very person talking about it, why?
Because you have websites like this trying to slander you for telling the truth.

For a guess it could be the crackhead and his ex prostitute wife that ran Snopes that runs fullfact. Just a guess.

Anywho. I am more into freedom than lock-downs.

So yesterday we went to a town here called Lublin.
Every month there is an outdoor market for antiques. On the last Sunday of the month. Like yesterday.

I was thrilled to see so many people at said event. Thousands of people not scared by government propaganda and lies.
I noted only a handful in masks, possibly 20 people or so.

I noted thousands without.
Hey and we all live today still.

We watched people that have come from all around the world walking high-wires like every summer before last summer.
We noted as we walked along old town cobbled streets superb people busking playing classical music under arches.

We noted street performers in costumes acting as a statue.

We took in a meal at an Irish bar. Angus steak it was for me.
Superb. Tasty and surrounded with good company.

I spoke to a Polish lady with an American accent who was married to a gent from Switzerland. She was breast feeding but I hardly noticed.
It is after all natural.
It restored my faith in humanity. The whole day did. The maskrons are now in less than 1% of the population.

They can keep the masks on. They can do whatever they want.
As long as they stay away from me and mine.

I took the camera but left it in the boot of my car, so no pics sorry.

Have a superb week ahead.

Posted via proofofbrain.io
#deepdives #informationwar #news #proofofbrain
3 months ago in Proof of Brain by shepz1
100%
-100%

All this covid crap is smoke and mirrors. Glad you had a great day out 👍

Covid crap it is!

Covid crap it is!

You know the script, no need for me tell you

I do not believe in germ theory so do not visit doctors anyway. I - just like you are the best doctor in the world when it comes to self. Nobody knows you or I better than we do. :-)